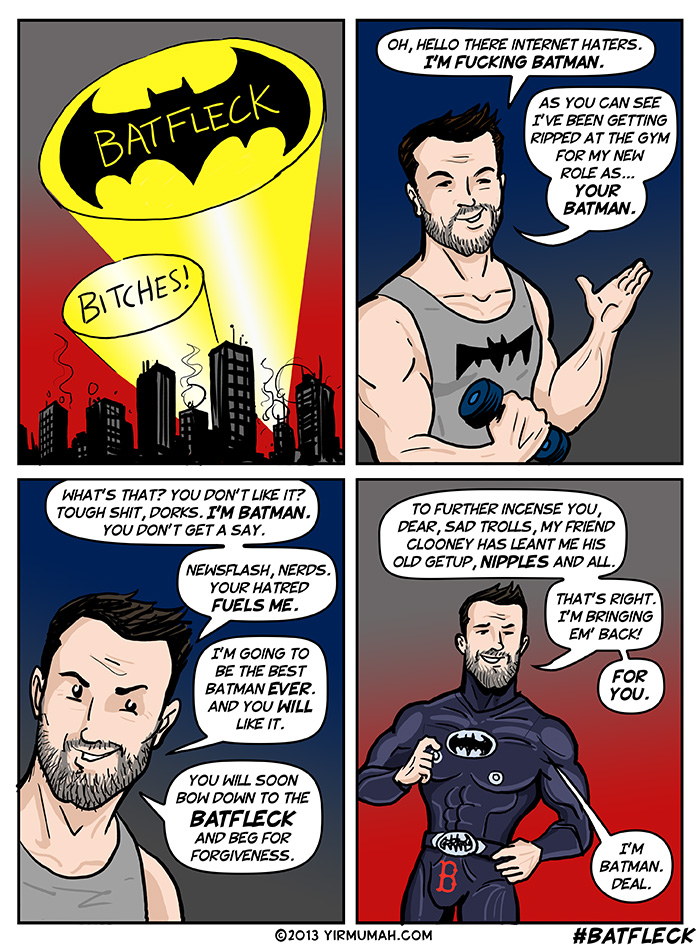 The internet pretty much broke in half Thursday night with the news that Ben Affleck will be the new batman…. KNEEL BEFORE YOUR BATFLECK!!!

I know Ben Affleck personally…. okay, no I don’t. I did pee beside him once on the set of Dogma (as seen in Classic YIRMUMAH #2 “THE COMIC WITHOUT FEAR” which sported a Daredevil cover) I do however know other people who do know him. I’m not sure why there’s an outrage, I mean, look at the list of previous Batmans. One guy started his career on the FACTS OF LIFE and was on ER. Jim Morrison was once Batman. So was Beetlejuice and the guy from American Psycho. So I don’t see the big deal with Holden McNeil being your new Batman. At least he KNOWS comics. AND he has Oscars coming out of his ass… he understands what works on film.

It’s so easy (too easy) to just make fun of Ben Affleck, or throw out old jokes about Daredevil, or classic… BEN AFFLECK WAS THE BOMB IN PHANTOMS, YO!(a joke only View Askew fans seem to understand) I wondered to myself… I wonder what Ben was thinking when he saw Facebook or the internet imploding. If he even was online at all, I know if I were Ben Affleck, I wouldn’t waste my time online, I’d be CONSTANTLY counting money and WINNING.

Anyways, the NERD-RAGE is always fun to watch implode in on itself. The joke really IS on you, the Batman fans. I recall when people were up in arms that Heath Ledger was going to be the joker… there were a ton of BrokeBack jokes, blah blah blah…. but Heath Ledger BECAME the fucking Joker…. so much so, it may have cost him his own life.

I guess what I’m saying is, it might be awesome to have Ben Affleck running around fighting crime in real life. Not really.