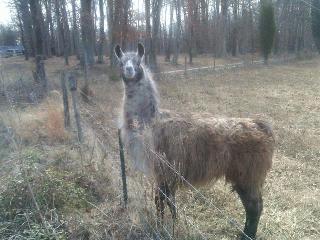 “He was after me,” Griffin said. “I don’t know why he was after me.”He added: “That thing jumped on me and knocked me over into a wood pile.”Griffin said he ran from the llama and jumped into his car for cover. The animal then attacked his car, he said, head-butting it and hitting it with its hooves.“He was all over me and that car, both,” Griffin said.Griffin then made a 911 call that stunned dispatchers.“Your phone is breaking up. What’s got you hemmed up?” the dispatcher asked.“A llama,” Griffin said.“A llama?” the dispatcher replied.A Cleveland County detective came and tried to scare the llama away with his horn and siren. It then started to chase his car.The officer led the animal back into his fenced-in pasture, then did a U-turn, came back out and shut the fence.He said minutes later, the llama was calm and approachable. The animal’s owner said the llama just likes to smell new people.