Stuff I learned at Pittsburgh Comicon on Friday

So I attended Pittsburgh Comicon very last minute thanks to my old pal James Patrick who had to bail on his table spot at the last minute. I got to share a spot with a nice guy named Michael K. Easton (his “professional” title) of Short Pants Romance –

Pittsburgh Comicon is run by some great/friendly folks who have been holding it down in Pittsburgh for ages. The “comicon” scene around Pittsburgh has been kinda confusing for the natives because there’s this other show called “Steel City Con” that’s held like three times a year and everyone who’s not a comic fan thinks it’s the same “show”. It is not. I kinda feel like this sort of hurts attendance or profits for the local creators just because the local fans only have so much to spend and if they see you 3 times a year it’s not as special. I don’t like the feeling of competition (even though you’re not actively competing) for that college kid’s dollar or commission sketch. It’s even tougher when you’re two artists sharing one table. I guess what I’m getting at is, unless you’re willing to totally “whore” out, there’s no money to be made at these types of shows for the “little guy” — and that’s not why I was really there, in fact it was a GREAT relief to me to know I didn’t pay for a table, or a hotel room or gas, or product…. I was just goofing off…

What the heck was I doing there? Well, I had no real rhyme or reason seeing as how I’m a “has been” in the comic book world who hasn’t had a new title out really since Hero By Night, but I wanted to say hello to some old friends while they were in town.

I did notice that the “whores” were back at shows. This has probably been going on, but I haven’t been at shows to really notice. The “massage” gimmick was so friggin sad. At one point two ho-bags stopped at our table and asked us to stop by their table for a photo and a massage… but they didn’t stop at the table next to me where the guy was sitting with his wife. Questions persist…  Did I look THAT desperate for a woman? Do they hone in on dork duos? Even worse, do OTHER creators actually go do that shit? Pathetic. I wish it didn’t exist at shows, period.

ENERGY GUM PEOPLE. You know, I don’t know how safe it is… but it was really odd to see this company I’d never heard of giving away “free samples” of a gum they say had more effect than redbull, coffee, 5 hour energy… all instantly. And god knows what’s in it. What will they do when some uber nerd gobbles a whole box or two and has a heart attack? Dumb…. I honestly can’t believe the show let them in to do this at all. Seems like it could be a lawsuit waiting to happen… Imagine dropping your kid off at a comicon and there are these “pushers” inside pretty much selling you Four Loco in a gum. GREAT.

I didn’t return on Saturday (which would have been busier) – mostly because of Roller Derby day, but also because I just felt very distant from this scene. I was out of place. I didn’t belong. I’d honestly rather see Michael K. Easton sell his prints and commissions then me squatting at his table doing “Will Draw Anythings” …. here are a couple of them for your amusement… 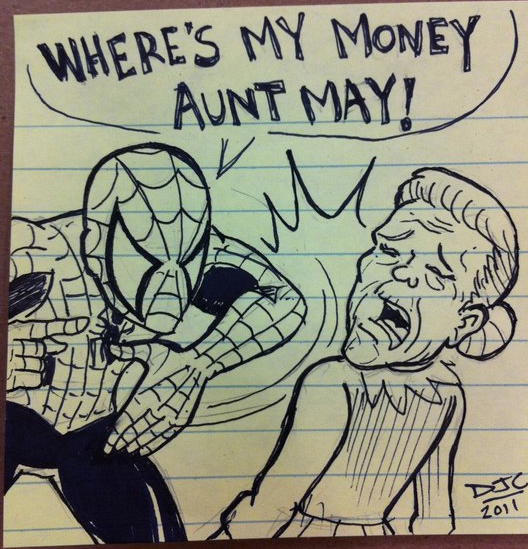 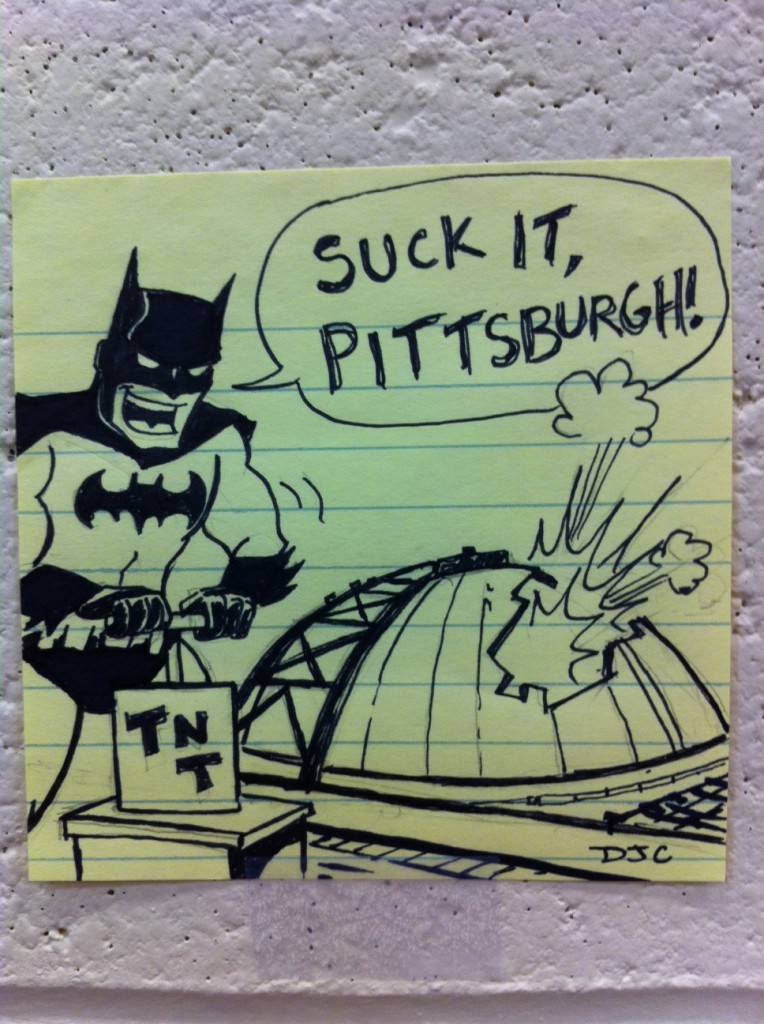 The last one is because of the rumor of the new Batman movie which is filming in Pittsburgh going to blow up the Civic Arena…. which I actually heard from a little bird that this is true and an offer will or has been made.