A funny thing happened last week, one of our fans who runs a Jack Kirby art blog in spanish asked if he could translate last week’s comic for his blog. I agreed. … END_OF_DOCUMENT_TOKEN_TO_BE_REPLACED 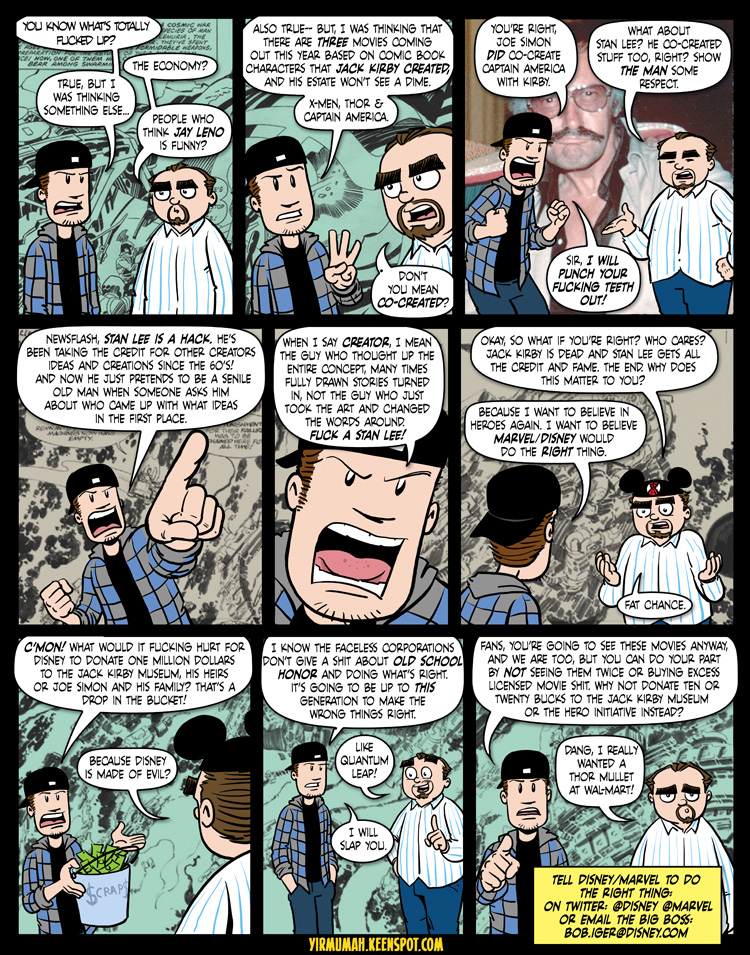 Don’t debate me here, I know the truth. Want to know what Jack Kirby himself said about the creation process of who WROTE and CREATED the things he worked on at Marvel? Listen to the words straight from his mouth in this mp3: “Jack Kirby Tells You The Truth”

Little do people know that Jack Kirby SINGLE HANDILY saved Marvel Comics and literally stopped them from closing the doors. Seriously, they were taking out the furniture when Jack showed up one day and made them stop. All Jack wanted back then was a little respect and acknowledgment and a new title from the company he saved and the NEW industry he spawned from his imagination. Marvel Comics has made BILLIONS off the back of Jack’s creations and energy, but all he saw from it was a page rate and NO contract. He didn’t even want his “fair share”

All these years later, and billions of dollars in movie money and licensing based off things Jack created,  and Marvel has never dropped ONE DIME to the estate of Jack Kirby. That’s fucking sad. What’s even more sad is, the MAIN thing keeping that company going is still Jack Kirby’s creations. It’s why they never really came up with anything new… just the same characters and stories rehashed over and over again. They just bring in new Stan Lees to change the words around.

Now that DISNEY owns Marvel and has money to spare, MAYBE they’ll do the right thing. Of course we’ve heard the rumors of how evil they can be too… but here’s a BIG chance for both of these companies to step up and do the honorable thing. Wouldn’t that be an awesome story and make you believe in heroes again? Imagine if the Jack Kirby Museum had the backing of Disney Dollars???

Disney, do what’s right. Hook up these old schoolers and their estate. Walt would have loved that. Remember Walt? That guy who made you?

Do the right thing!