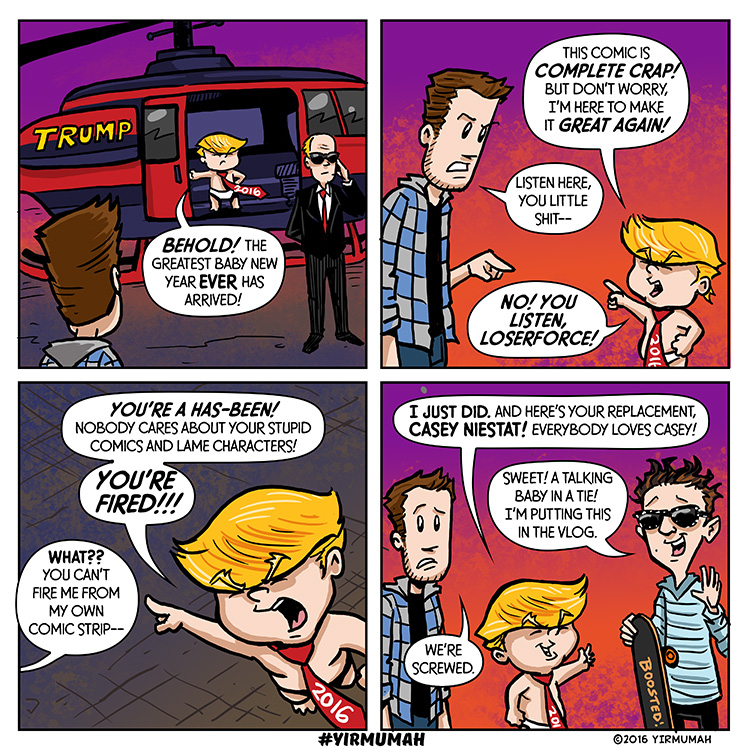 Happy New Year everyone! Just a small reminder that… YIRMUMAH IS BACK! And there will be a public comic update on Mondays and a Patron only update on Wednesdays at http://patreon.com/comics (Details there)

So, falling in line with the comic’s old tradition, we meet the NEW baby new year 2016… yeah, It’s Baby Trump. Pretty much because he’s dominated the media for a year now or so, and it looks like he’s going to be your next POTUS, like it or not. I’m not thrilled, but I believe the chaos that will ensue will make things interesting to watch. Ever since I picked up reading about stoicism, (thanks Ryan Holiday) I really just can’t stand politics much, except that it’s a theater of the absurd for me. I’ve joked with Ally that i may just go into the voting booth as a registered Democrat and pull the TRUMP lever and yell… “WILDCARD, BITCHES!!!!”

If you don’t know who CASEY NIESTAT is, well that’s okay. Now you do.

I’ve been a fan of Casey’s since discovering his work on the HBO show “THE NIESTAT BROTHERS” which was fantastic. Years later now my son Dillon tells me about Casey’s daily Vlog and now I’ve been hooked since October. I just really like the guy a lot. And you can thank Casey in part for the return of YIRMUMAH. Why? Well some of the underlying tones of Casey’s vlogs and messages are about creativity. In a recent Vlog, he visited a vlogger named Jake Roper in the hospital who just found out he had cancer two weeks prior to the video. Casey didn’t want to take his camera in, but Jake wanted to get the message out. Somewhere in what he said was that his first thought when he found out he had cancer and could die was that he didn’t create enough stuff yet! I think it was immediately after that video that I decided… FUCK THIS SHIT… I’m relaunching my webcomic. For good or bad, It’s haunted me and I keep saying “some day…. maybe next year…” But goddamn it folks, we may not get a next year. DO IT NOW. Whatever it is.

And so I enjoy Casey because he shares the philosophy of DOING. He’s a DOER. And old Yirmumah fans know that I appreciate doers. Casey has a nice thought that you should be doing one of two things…. either figuring something out or doing it. So thanks to Casey (who will probably never find this) and thanks to Jake Roper too. You helped to rekindle the fires in my comic drawing engine.