I live in strange area… a crossroads of old and new ideas for sure. I don’t want to paint the whole Fayette / Westmoreland County area as “racist” or anything. The comments I’d hear use to shock me a little bit and anger me, but now I have a different outlook on the idiots around me. They can’t help it. It’s not their fault. It’s how they were raised…generation after generation, filled with DUMB backward ideas. I forgive them. I humor them when I come into contact with the “natives” now. I think it’s cute how they call their medicine “DRUGS” and how they have to pick up their drugs.

It’s always funny to me how these conversations start. First we’re chatting about gas mileage…. then drugs…. then suddenly from out of nowhere… OBAMA IS THE DEVIL. It often takes much self control for me not to just laugh out loud. What was really cute was there was an old lady in this situation who was being quiet and nodding her head a lot to appease this old man and his rantings. But when he got to the point about Obama being so bad she asked, “Well, who would you suggest? Who’s going to do a better job on the other side?” — and the guy’s answer was “Uhhhh…uhmm…uhhhh…well…uh….” He didn’t really have an answer… then he finished up with “Well I’ll tell you…I’d vote for Trump”

Good lord. I couldn’t take it anymore. I had to chime in and drop some knowledge. I told the old man that Trump wasn’t going to run, I’d bet him 10 dollars. Trump is just being…well, Trump! All this guy knows is the Celebrity Apprentice and Obama haters are just ITCHING to use the catchphrase “You’re Fired” in a campaign. That’s it. Nothing more. Trump will not run.

When he mentioned that “America isn’t ready for Sarah Palin” — I just laughed out loud and said… look man… why would anyone want to ELECT someone who was ELECTED for a job before and then quit early to pursue money. That’s not what America needs, we need a leader who will make tough decisions and stick to his guns. Unfortunately, that doesn’t seem to be Obama yet either. I closed my statement by explaining to this room of 68-75 yr olds that the real problems aren’t with ONE man or woman… it’s the entire system. All of Washington needs change, and it will take more than one person or party to do that. It’s not likely to happen any time soon, so don’t fret about it, and don’t get played by the media or the propaganda machines on both sides because it makes you look like a fool. I also told the old timers that it wasn’t fair how they were being treated like second class citizens after all their hard work, and I can understand feeling frustrated with a broken system in Washington running amuck, and being subservient to the rich and Wall Street while the little guys suffer at the gas pumps.

The old man’s car was done and he left, but they seemed to all agree with me and all got a spark in their eye. If I was running for something, I could have had their vote.

Fat chance of that ever happening.

It might just be my paranoia, but on an unrelated note I keep thinking that our car was sabotaged by the Jersey Shore Roller Girls who beat our Derby Team handidly Saturday night. Another car was broken into that night and skate gear stolen…then we get a screw in our tire. I just envision these rough Jersey Shore girls rolling into town, beating our gals up, breaking into cars, mugging people, throwing screws in the parking lot then rolling out counting their money and werther’s originals. (inside joke) – Of course THAT’S NOT true. Jersey was a fast team… sure there were some questionable PUNCHES to the faces of our gals, but hey, it happens! The truth is this…. They were an “A” team who came in and beat our “B” team. I’m pretty confident that our “A” team would level the holy shit out of them, and this is something I would pay to see.

Back to the drawing board… 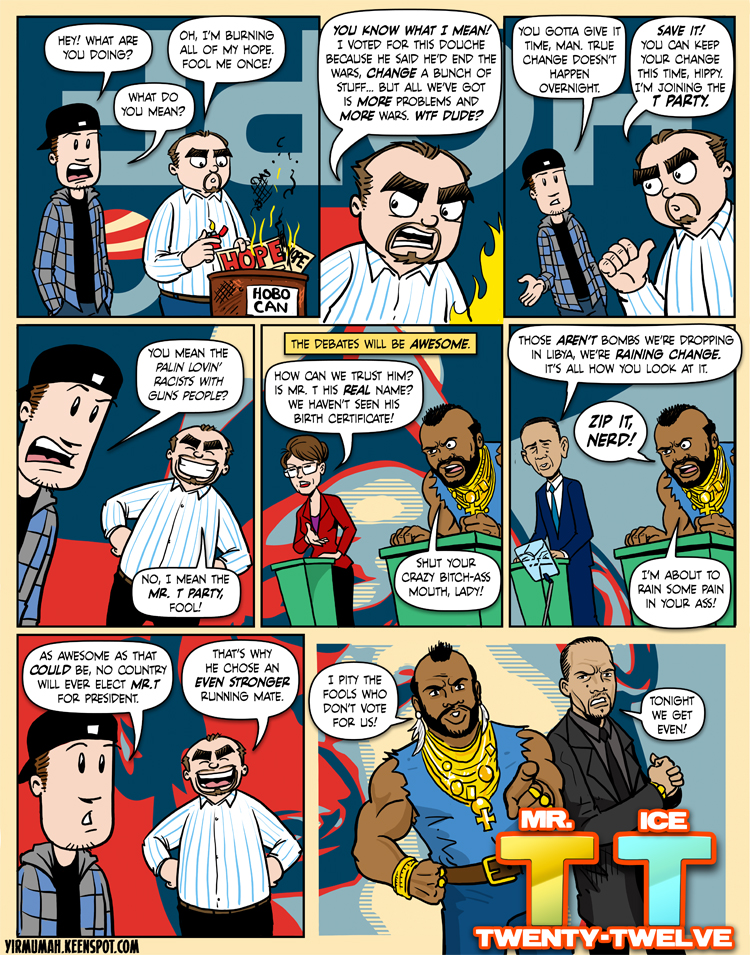 It may come as a surprise to some, but Mr. T and Ice-T actually have collaborated before. It’s a fact the Ice-T actually wrote all of Mr. T’s raps in the 8o’s. No, I’m not making this up… google it, bitches.

Here’s a little treat for you. I love how Mr. T is totally rapping about the bible while kicking dude’s asses and throwing them down elevator shafts. NOW THAT IS SOME CHANGE I CAN GET BEHIND!