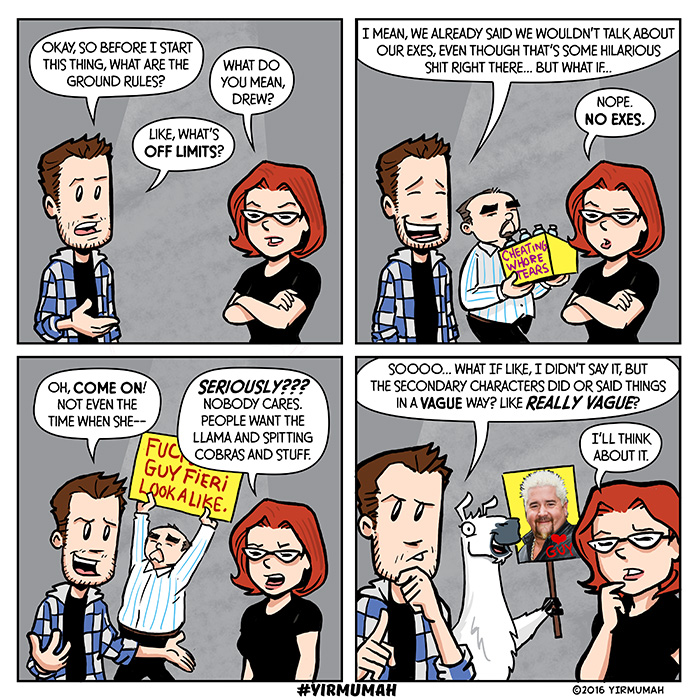 Don’t call it a comeback… but…ahem…

So, this is as far as I’ll go with this whole subject for now. Yirmumah fans know that originally this comic was semi-autobiographical, featuring versions of myself and my friends. I always have this little voice inside me, writing gags and strips. Over the years, things have changed, friends have fallen out or off the map, it doesn’t mean it’s always in a bad way. Like, remember Dave? I would still call him a friend, but I haven’t seen him in ages, he moved farther away, got married, had kids… and so he wasn’t really around my life to be involved as a character much. I sprinkle them in here and there.

Then there was Bob. Boy did we have some serious fallings out over the years, to the point of never working together again. Lots of old comics were by “Coffman & McDeavitt” but we just grew apart in that way. BUT, after almost 20 years we are still friends and brothers.

That said however, you won’t be seeing “Calypso” in any new strips. We went through a not so nice divorce in 2013 which split my personal life into shambles. Way too much drama. I’m glad to say though that I’m MUCH happier these days. I think like anything, people just grow apart, make dumb mistakes, lie, cheat, whatever. We’re all capable of doing some fucked up things. Some people are good, then turn bad, then sometimes good again. Look at Darth Vader for example?

Enough time has passed that I’m comfortable expressing things in humor. I know my ex-wife will be nervous that I’m even dabbling in the Yirmumah world again and that I might make comics or inside jokes aimed at her for my own enjoyment or laughs, but she can rest easy! Frankly, nobody really cares about any of that personal life bullshit. And nobody really cares about her “character” either. Not even herself apparently. I know there are a TON of people who can relate to having divorces & psychos in their lives… but I have bigger fish to fry.

Writing gags and situational comics, pop culture jabs, it’s just something you can’t shake off after doing it for so long, no matter how much you try to leave it, your characters just speak to you. Only those who have done it regularly really know what I mean. It’s a wonderful curse.

The world is MUCH different in the few short years since I stuck a fork in Yirmumah. It’s hopeful but also pretty friggin scary. I have a loose gameplan for what I want to do in 2016 and I’ll be talking about that more in the future here.

For now… go like us on the book of Faces…. https://www.facebook.com/yirmumah?_rdr=p